Heraldry of an Annulled Knight

One may wonder if there are any heraldic consequences to Sir Fred Goodwin’s loss of his knighthood, a matter receiving a great deal of media attention today. I’ve not been able to find any reference to his having received a grant of arms and it may simply be that the great man was so busy in the years following 2004 that he had no time to petition for arms. 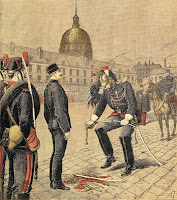 In any event, as he was a Knight Bachelor I believe the heraldic import of this turn of events would simply be that he loses the right to adorn depictions of his arms with the badge and ribbon appropriate to said honour. [The heraldic equivalent of a ceremony similar to Alfred Dreyfus’ degradation as shown in a famous contemporary engraving – wonder if this could now be re-enacted outside RBS HQ in Gogarburn?]
Sadly, as I say I could find no illustration of Sir Fred’s coat of arms from which to depict the removal of said ribbon and badge, so I’ve had to come up with my own. Not having had my second coffee of the day I cannot yet blazon the full achievement save for the central charge, an increasingly common one in austerity-era heraldry, a clutch of Pounds Squandered. Also I was unsure whether present heraldic practice makes a Baton Sinister or Bordure Gobony more appropriate so to be on the safe side I’ve used both, no doubt equally richly deserved. 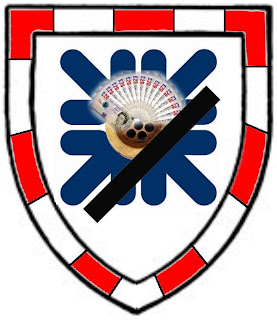