A snippet of heraldic news spotted today reminds me of the old cliché regarding buses: you wait for ages, then three come along at once. I certainly did not intend to reprise the topic of my previous post this soon, if at all…
Council authorities at Colmenarejo, near Madrid, have decided it’s time to replace the town’s coat of arms, which among their other qualities are meant to be canting as they depict a beehive, Colmena in Spanish. A variety of reasons are cited: the arms were not adopted under the terms of the regional law governing arms and emblems, they were the winning entry from a schoolchildren’s contest… I suspect that the real reason for their imminent replacement lies in what one resident told a newspaper: “A few years back a fountain bearing an enlarged sculpture of the arms had to be withdrawn because of an unfortunate resemblance.” 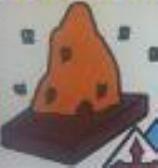 Unfortunate resemblance? Whatever can he mean?