Moves to ‘Disneyfy’ Austria’s embarassingly belligerent coat of arms may follow on the heels of this campaign to modify the country’s national anthem, as perceptively noted by Austrian MP Carmen Gartelgruber. It won’t do to persist in offending everyone in Piedmont, Moravia or any other territory long ago overrun by Austrians. This campaign to ‘update’ national symbols mirrors a wave of heraldic alterations requested or enacted in the last few years, the most recent of which is presumably that launched in Flanders.
One wonders if, having successfully emasculated national and local arms, those who fret about such things will move on to personal arms as well. Are French visitors to Blenheim Palace perhaps offended by seeing the French fleur-de-lys in an escutcheon on the Duke of Marlborough’s arms? Off with his augmentation! Caribbean islanders may demand that any reference to their islands be removed from the Columbus coat of arms, or better still that the whole be simply painted blood-red as a mark of shame.
And the heraldry of other countries, such as Spain and Hungary, is no doubt replete with opportunities for hurt feelings; Hungarian heraldry in particular displays a distressing profusion of severed Turks’ heads, for no better reason than that the entire country was once actually overrun by, and subsequently reconquered from, the Turks – can’t have that!
A coat of arms may be based upon any number of rationales: it may represent what a lineage or an individual stands for, decisive moments in national or family history, or a personal interest or accomplishment of the first bearer – to the extent that one can even learn the rationale for the most ancient ones, passed down unquestioningly for so many generations that the original meaning is now a mystery. Of course, such inmutability does not mesh well with the modern trend to stand for nothing, to pliantly turn whichever way the wind blows, and to conform to ever greater homogeneity so that we all eat, read, wear and watch the same things. It seems then that if carried to its logical conclusion heraldic tampering will eventually require that the arms of all persons, regions and nations be strenuously refined to the point of not possibly offending anyone anywhere. I leave you with the following inspiring example of the New Heraldry: 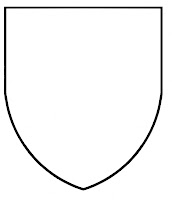