Whilst in London last week I visited the City’s historic church of St Botolph without Aldgate and admired its unique memorial to Robert Dow, Master of the Merchant Taylors in 1578 and a generous philanthropist. The only images of this memorial that I was able to find online focused – understandably – on the man himself; the arms of the Merchant Taylors’ Company take pride of place atop the whole but at the bottom of this fine monument, and at something of an angle to the viewer, we find his arms as well, and I am pleased to share a photo of them. Dow’s family seem to have been an armigerous lineage from Suffolk and his pedigree was recorded in the 1568 Visitation of London. 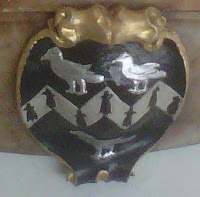 The arms are clearly canting, but in view of this it’s all the more surprising that there seems to have been so much confusion around the correct form of his surname, even in his lifetime. The published version of the Visitation – which, one hopes, faithfully reproduces the Herald’s notes – give it as Dove, and biographical materials about him reference accounts of ‘Robert Dove’ as Collector of a subsidy. Yet the monument clearly refers to him as Dow. Strype’s survey of London indicates that the initial marker, a brass plate erected by his family and heir, referred to him as Dow; but the more imposing monument that we see today, erected by the Merchant Taylors in the 17th century, makes it Dove again. One almost begins to wonder if the letter w was pronounced with a Germanic sound in Jacobean times! In any event, if one happens to be in the vicinity of Aldgate this memorial to a liveryman is well worth a look-in. 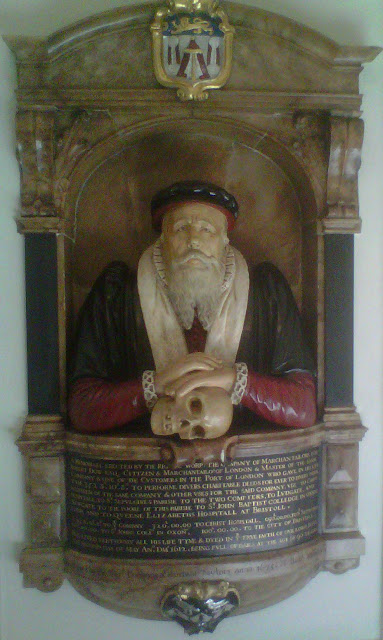