Merit, Honours and the Order of Groucho Marx

Those who’ve been worked into a fuss over the presence of certain names on the New Year’s Honours List should perhaps consider how they would feel about living under the Spanish honours system.

In only his second cabinet meeting after taking office, Spain’s new Prime Minister Mariano Rajoy awarded – or rather, submitted for the Royal signature – the Grand Cross of the Order of Carlos III to every minister in the recently replaced cabinet, with the exception of the ex-Minister for Regional Policy and the ex-Prime Minister, José Luís Rodríguez Zapatero, who each received the Collar of the Order of Isabel the Catholic.

There are of course at least two ways to look at this. On the one hand there’s nothing new about handing ex-members of cabinet a Gong on their way out the door – one of Spain’s best-known commentators on nobility and the monarchy remarked ten years ago that the Order of Carlos III was known wryly as the ‘Cross of the Fallen’ as it was given to all ex-Ministers. One could argue that such grants are an example of bi-partisanship to ensure that all outgoing ministers of whatever stripe receive equal recognition for their service to King and Country.

On the other hand, the very inevitability of the awards raises many questions, some of them troubling. Two days before the awards were announced Spain’s Supreme Court opened a probe into allegations of bribery and influence peddling by one of the new knights, ex-Minister for Public Works José Blanco – what sort of message does that send? Zapatero’s relations with the Catholic church ranged from tense to hostile during his time in office so it’s difficult not to find some irony in the choice of the Order of Isabella the Catholic for him. And if the awards have nothing to do with one’s achievement and performance – or lack therof – in the post, and there seems to be nothing a minister can do to escape the distinction, why wait till one leaves office? Why not just leave a sash and a star on every new Cabinet Minister’s desk the day he or she first turns up for work, like the courtesy bags handed out to celebs at awards shows?

The sight – no, wait, there is no sight: unlike investitures at Buckingham Palace, there is no publicly recorded ceremony for honours to King Juan Carlos’ subjects, merely some boilerplate text announcing the grant in the equivalent of the Court Circular. So let me try again: the idea of men and women who but a few weeks ago were slagging each other off in the press about what a poor job they had done, suddenly doing an about face and dutifully awarding each other medals, could for some lend credence to the idea of groups such as the Illuminati, the Bilderberg Club, or other favourites of conspiracy theorists. At the very least it does a lot to reinforce the ever more widely held impression that politicians of all parties in every nation form a class of their own, utterly divorced from society at large. Of course, genealogists love shorthand so in a couple of centuries all the fine detail will be forgotten and those who find these worthy individuals in their family trees will write after their names: Minister of X, Knight of the Order of Y. In the meantime one wishes that some civic body would begin bestowing politicians with the Order of Groucho Marx, which would have to be inscribed with the words ‘I don’t care to belong to any Order that will have me as a Knight.’ 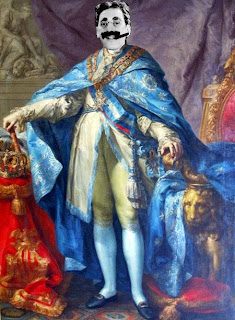