A 17th-century Anglin family from Dungarvan, County Waterford is documented by two items found in Madrid’s notarial archive: the will of one of its members, and the subsequent paperwork resulting from the will’s execution.On 24 December 1718 Thomas Anglin made his will before notary Domingo de Munilla y Zuazo in Madrid. Thomas was the Surgeon to the Italian Company of Guardias de Corps, under command of the Duke of Populi. He states that he was the son of John Anglin and Margaret Gambon of ‘Dongarban, Guatrefort’, both deceased. Thomas seems to have been unmarried and left no children; after sundry bequests, funeral arrangements and the like, he names as his executors Don Eduardo Crean and Don Juan Caral, both Irish residents of Madrid, and Diego Duly (perhaps recte James Dooley?), Standardbearer in the said Italian Company, and Francisco Genar, another one of the Guards. Finally, he designates as his heir his brother John Anglin, then in Ireland; after him, the testator’s nephew Thomas Anglin, then residing at Ocaña in the diocese of Toledo. Dr. Thomas Anglin died before September 1720, in which month an inventory of his estate was approved by his nephew, also Thomas Anglin, but the latter being (by 1725) a priest at the Colegio de San Jorge de los Irlandeses in Alcalá de Henares. The younger Thomas was acting with a power of attorney granted by his uncle John Anglin and said to have been recorded on 16 September 1720 before notary Juan Pérez Muñoz in Madrid.A complication arose however from the fact that Dr. Thomas Anglin left some money – 60 gold doubloons – to one María Thomasa Anglin, a minor, and 6 doubloons to her mother, Doña Ana María Benavente. Neither was apparently present at the time the estate was handled in September 1720 and Eduardo Crean held some funds back which he was – eventually – to deliver as specified in the bequest. But on 23 March 1724, María Thomasa died; she had been in the care of a Spanish couple, for reasons not specified in these two records. In 1725 her mother began proceesings before Diego Bustillo Pambley, a Madrid official, to demand – as her daughter’s heir – the money left by Dr. Thomas Anglin. But Crean presented a list of expenses derived from the child’s upkeep, and in the end Ana María de Benavente settled for thirty doubloons. Taken together the two records suggest the following family composition. One wonders if they left other descendants, in Spain or in Ireland: 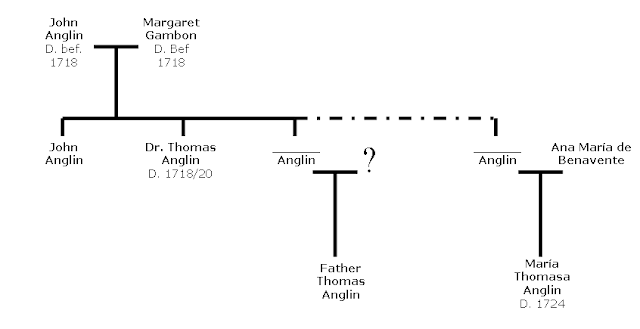