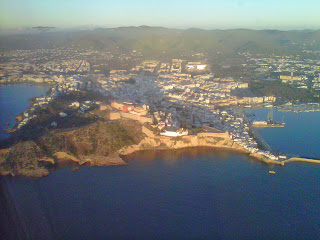 While conducting research in Ibiza recently I came across the death record of William Alliston, who was taken ill and died aboard a yacht there on 3 April 1887. The record states that ‘Guillermo’ Alliston, native of Blandford in the county of Dorset, aged 43, married and a cook by trade, died aboard an English vessel, the name of which is unclear – Joam, Joan or possibly Foam? The informat for the record was Don Guillermo Wallis y Valls, an Ibizan gentleman.

A quick search of the IGI suggests that the deceased was probably William Frank Alliston, Christened at Blandford on 31 July 1842, the son of Robert and Charlotte; and who married, at Buckland Newton on 2 July 1863, Sarah Kingman. This family, with daughter Mary Charlotte Alliston, appears  on the 1881 census at Northwood on the Isle of Wight, which may indicate that the vessel aboard which William met his fate sailed from Portsmouth or Southampton.

SOURCES: Deaths, Book 14, P. 182, a copy of which is in the Arxiu Històric d’Eivissa; IGI, at www.familysearch.org.